Ubiik and Monogoto together bring best in class performance with their respective Radio Access Network and Cloud Core Platform to deploy cellular IoT for cloud-based private and hybrid networks.

The goRAN Ignition Kits include everything needed to get started with deploying a complete LTE-M/NB-IoT network:

"We've been collaborating with Monogoto for more than a year on a solution that will revolutionize the Cellular IoT industry," said Fabien Petitgrand, CTO of Ubiik. "This is a great way for our customers to get started with deploying zero-configuration LTE-M/NB-IoT networks."

Ubiik goRAN is a full-software Release 15 Radio Access Network (RAN) designed for private networks. It supports multi-carrier standalone NB-IoT, standalone LTE-M in 1.4MHz and 3MHz bandwidth, as well as LTE Cat-1 and Cat-1bis up to 5MHz bandwidth. It can also support voice applications via VoLTE both for LTE-M and Cat-1. With its LTE Cat-1 and Ethernet backhaul options, it can operate either as an eNodeB connecting securely to an external Evolved Packet Core (EPC) or as an all-in-one Access Point with built-in EPC and integrated Home Subscriber Server (HSS). An external HSS can also be interfaced over 3GPP's S6a standard interface.

"We are thrilled to be partnering with Ubiik to offer our cloud-based platform, enabling plug-and-play deployment of private LTE networks at any scale," said Maor Efrati, CTO of Monogoto. "We see the benefits from the cloud for private and hybrid LTE networks, and we are excited to offer it alongside Ubiik's goRAN."

Founded in 2016, Ubiik started its IoT business by providing Weightless™ LPWAN, a high performance open standard successful with electricity Advanced Metering Infrastructure private deployments. Since its successful AMI project in 2018 which has expanded its product portfolio to a PaaS cloud platform, Ubiik has become a vertical IoT solutions provider. It has since grown its connectivity offerings to include LTE technologies to cover the multi-modality of the IoT market, especially for applications requiring the use of public cellular networks. Visit Ubiik online at www.ubiik.com

Monogoto is the first ever private-public cellular cloud - Enabling public and private seamless connectivity for any project with global connectivity alongside private LTE/5G networks. Monogoto provides global Internet of Things (IoT) and machine-to-machine (M2M) connectivity using powerful APIs that enable enterprises and developers to design, build, manage, control and scale their IoT applications quickly and securely. Enterprises use the Monogoto platform to connect and control cellular-based sensors and devices, such as point of sales, ATMs, wearables, smart lights, fleets of cars and packages, and leverage its APIs to provide enhanced flexibility and capabilities like cybersecurity, procurement, and IT management. Visit Monogoto online at www.monogoto.io 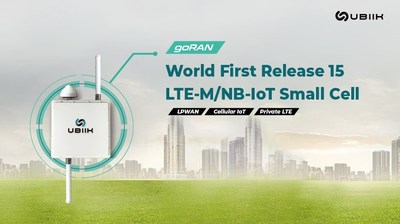